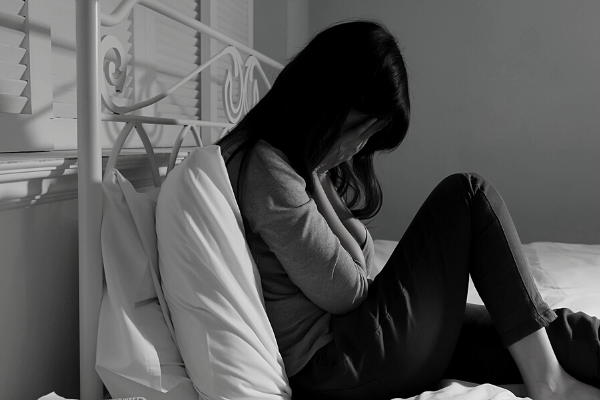 TW; Suicide. So, the time is 6am and I’ve barely slept a wink for 3 nights straight. On my first two sleepless nights I got up and read, watched TV and baked some cookies.

Tonight I stayed in bed, crying from exhaustion, re-living my childhood traumas and stewing in self-loathing.

Insomnia is driving me crazy tonight but it’s nowhere near as bad as it used to be. It went from being a minor inconvenience at 12 years old to the main aggravator of my raging depression at 13, filling night after night with panic attacks, self-harm, suicidal thoughts and perverted creeps.

Of course, nobody took it seriously back then because all teenagers stay up late, don’t they?

Read: How To Beat Insomnia – 8 Tips For a Better Sleep

Do I stay in bed and will myself to sleep, or do I admit defeat and get up?

At 13 years old I would usually chose the latter. My 2008 laptop with its shitty dongle internet connection became my crutch for a while. I innocently played dress-up games and spider solitaire while painstakingly downloading music one song at a time (holding my dongle in position lest my internet connection die and corrupt my precious mp3 files).

It wasn’t long though before even MCR wasn’t enough to distract me from myself.

There is something so isolating about being awake at 3am in the morning. It’s like the world outside your bedroom ceases to exist and it’s just you, alone, trapped with all your terrifying thoughts. I needed to talk to someone – whether as a confidant or a distraction – so I ended up visiting a lot of sketchy online chatrooms.

Look, Myspace had just died a horrible death. MSN was a wasteland because my friends were asleep and Facebook was only just becoming popular for high-schoolers. Social media was still in its infancy and things like ‘catfishing’ and ‘online grooming’ didn’t really exist. I mean, internet safety???? Per-lease.

So, I went on a bunch of forums for self-harming ‘eMo-KidZzz’. I created a doll-faced alter-ego on the creepy metaverse that is IMVU (anyone remember it?) and video-chatted through the night with people on Omegle.

I made a couple of friends, sure. But I mostly encountered pervy old men masquerading as teenagers. 40-year-olds who ‘just wanted to be friends’ but were obsessed with whether I’d started to grow boobs. Grooming, unsolicited dick pics and tirades of abuse if I didn’t send one back.

All because I just couldn’t sleep.

These strange internet interactions would only exasperate my lack of self-worth and mounting self-hatred. Like so many insomniacs, the lack of sleep, the isolation and the dark hours trapped inside my head not only made my depression worse – it made me more susceptible to suicidal thoughts.

“Too often, the only escape is sleep”

I felt so trapped, powerless and goldarned tired that I would cry, self-harm and sit for hours mentally fashioning innocent bedroom objects into weapons for my demise. Eventually I went to my doctor, complaining of depression and insomnia.

“I’ll probably feel so much better once I get some sleep,” I said.

However, I was refused sleeping pills and prescribed an antidepressant instead. Fluoxetine. Side-effects: suicidal thoughts and insomnia.

So, after a suicide attempt that I’m sure nobody saw coming, I was eventually prescribed mirtazapine, an antidepressant that also helps with insomnia. And boy, I still remember the elation I felt when I woke up after a full night’s sleep, groggy AF but with the actual sun shining through my window.

13 years later, insomnia still haunts me every now and again. I’ll have a few weeks, sometimes even months of bliss, before I’m back to 2 hours of sleep a night. And even though I’m more mentally-stable and self-aware than I was as a teenager, waking up in the middle of the night never fails to fill me with impending doom!