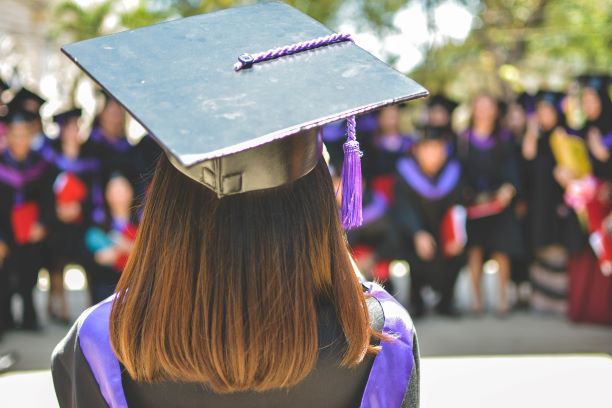 In a recent study conducted by Student Minds and City Mental Health Alliance UK, it was found that 49% of recent graduates believed that their mental well-being had declined after finishing university.

I mean, you’ve finally scraped that 2.1. You’re done with the mind-numbing lectures, the sleepless nights and the anxiety-inducing exams. You’re completely unrestrained by the education system for the first time in your life – you’re supposed to feel free, right? You’re supposed to feel empowered.

So why do you feel as though you have a case of post-university blues?

I came out of university feeling as though a weight had been lifted off my shoulders. I was so sick of studying and living the ‘university life’ that I waited for my graduation day like a prisoner waits for their release date. I think at the time I almost believed that my depression would vanish once the biggest stress of my life was no more.

Well boy, was I wrong! My depression actually got a whole lot worse, peaking after about three months post-graduation – and I’m not the only one.

Here’s everything I wish I’d known about post-university depression, plus some tips on how to beat the blues once and for all.

1. Rejection Comes With The Territory

If there’s one thing you have to get used to as a graduate – it’s rejection.

I’ve probably had over 100 standardised rejection emails, some of them from places like KFC and Home Bargains! It hurt a lot, but the trick is to not take it too personally. Remember that most companies use an ATS ‘Applicant Tracking System’ to filter CVs based on specific keywords. Out of probably hundreds of applications, 75% of them are rejected through ATS before they even reach a human.

You can read more about ATS and get some tips for creating an ATS-friendly CV over on CV-Library.

2. Self-Doubt Can Lead to Self-Loathing

– and quickly. It starts with a “hmm, maybe I’m not as good as I thought I was” after that first graduate-position rejection A few more rejections later and you begin to question all of your life choices: “why did I choose to study [insert humanities subject here]?” “Should I have gone to a better university?” “Why didn’t I get a degree-related internship during the summer instead of being all about the sesh?” Why, why, why?

It’s important not to be too hard on yourself. Constant ruminating can cause negative thought patterns that often keep you in self-fulfilling loops of depression, self-hatred and inaction.

Read: How To Stop Negative Thoughts

3. Avoid Relatives At All Costs

“So, what are you doing with your life now?”
“Have you found a job yet?”
“What positions have you been applying for?”
“When I was your age…”

Look, I know you mean well but seriously Aunty Greta, get off my back! That’s all I have to say about that.

4. The Jealousy Can Be Overwhelming

Ever pass up on a post-university get-together not only because the ‘what are you doing with your life now?” questions are especially painful in group scenarios, but because having to hear about your friends’ graduate jobs, fancy internships and travels abroad makes you want to gauge their eyes out with a fork?

Yeah, me too. In fact, it was found that 44% of students believed their friends were more successful than them post-university.

Unfortunately, the severity of your post-university depression tends to be worsened by comparing yourself to your fellow graduates. A small amount of jealousy is natural, but getting bogged down in it is extremely unhealthy.

Remember – especially when it comes to social media – that people tend to exaggerate their achievements and show only a filtered, successful version of themselves. People are also a lot less likely to talk about personal problems in large gatherings. Just like you, they want to be seen in their best light. If they do have a case of post-university blues, it is most likely hidden underneath a sunny exterior.

Spending too much time on social media can also become a bad habit that makes depression worse, so try having a detox every once in a while.

5. Having a Routine Really Helps

Look, post-graduation I spent a hell of a lot of time moping around in my PJs watching Netflix and eating jaffa cakes. Waking up past noon and going to bed at 5am. Not showering, not brushing my hair, all of the usual “life is pointless and I’ve given up” stuff.

The boredom and depression from the constant rejections convinced me that I was stupid, worthless, and there was no point in even trying anymore. Before I knew it I was stuck in a rut, religiously watching Jeremy Kyle reruns and crying because my sims’ lives were better than mine.

Routines are good for our mental health – they keep us grounded, motivated and prepared for success. So, start small and set achievable goals. Try to get out of bed at the same time every day. Shower, dress and eat consistent meals. Once you’ve mastered that, go even further – set yourself a goal to apply for at least one job a day, or spend an hour or two looking for positions.

Rather than watch TV or play videogames, read or cook instead. Learn something new even, like an instrument or language. These things will bring some variation and excitement to your day as well as being productive.

Check out these 70 self-care activities for some inspiration on things you can do to fill up your days while you’re job-hunting!

6. Talking About Your Struggles Is SO Important

Yeah I know, easier said than done. However, I went through so many lonely, miserable months of feeling like a failure, like a disappointment, and most of all wondering – why me? Why am I the only one?

Eventually I started talking to my friends about it and I realised that I wasn’t the only person suffering from post-university blues. Chances are that some of your friends are struggling too, whether they hate their new job or are doubting their entire career choice. Sharing these problems can make you feel less alone and encourage you to stop being so harsh on yourself. And who knows, your friends may have some brilliant advice or know somewhere who’s hiring!

Post-university depression is a very real, very debilitating thing to go through. It’s easy to feel as though you can’t handle post-university life. However, it’s crucial to realise that this is just the next stage of your journey, and you’ve made it here because you were strong enough to overcome the stage before.

Got any tips of how to stay positive when you have post-university blues? Please let me know in the comments!

Hi! I am a mental health blogger sharing my experiences with BPD, depression and anxiety. I have created this space of understanding and healing in order to reduce the stigma surrounding mental health. I also offer lots of self-care tips to help you live your best life! Any advice I give is based off my individual experiences only.