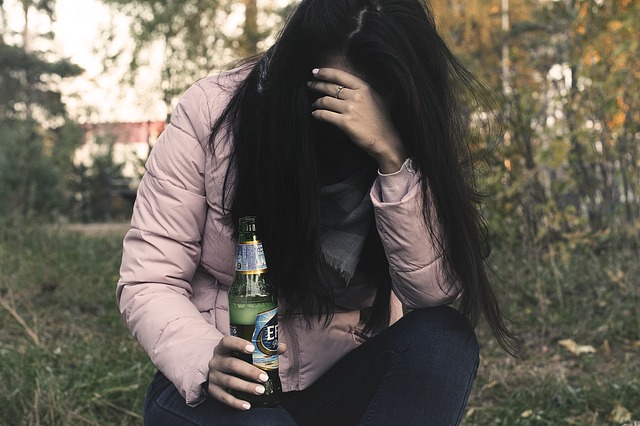 Having resorted to pretty much every destructive coping strategy at some point, I have way too much experience with the negative effects that they have on mental health.

It started once I hit my late teens. By this point, I’d been going to therapy for years but because there was still “absolutely nothing wrong with me“, it wasn’t really working out.

Back then, I wasn’t ready to face my pain. All I wanted to do was bury it.

I indulged in excessive partying, binge-drinking, recreational drug-dabbling … you know, just living my best life. I didn’t care if my coping mechanisms were unhealthy because hey, at least I wasn’t depressed, right? At least I was still alive. I mean, wasn’t that the point?

Of course, a few years into my bad decision-making I was severely depressed, had drug-induced anxiety and a host of dependencies that totally wrecked my mental health. Basically, all my unhealthy coping mechanisms did was mask my symptoms and allow them to intensify under the surface.

So, are any of these unhealthy coping mechanisms damaging your mental health?

Relying on Drugs and Alcohol

Abusing drugs and/or alcohol is one of the most popular ways to self-medicate. It is also one of the most dangerous unhealthy coping mechanisms out there because it has the potential to transform into a co-occurring disorder – a mental health illness alongside a drug-addiction.

Sure, it starts off great. That first bottle of wine loosens you up and soothes your stress to sleep. The first joint you smoke is accompanied by such a hazy dreaminess that every negative thought is swallowed up and forgotten. And that first white line – it can make you forget that you ever had depression at all.

But it always goes bad. That initial high is dulled to the point where you consume out of habit rather than enjoyment. The symptoms that you were trying to relieve get steadily worse. You even notice new symptoms – paranoia, extreme mood swings or aggression. You realise that you need to stop, only to find that you just can’t.

Whether it be physically or psychologically, drugs are addictive, manipulative and particularly counter-productive when it comes to mental health issues. Now, not only do you have depression – you also have a mentally-destructive and potentially life-threatening addiction.

Any form of physical or mental punishment counts, from scratching to over/under-eating.

Self-harm is dangerous for so many reasons. It facilitates negative emotions such as guilt and shame, puts you at a higher risk of a suicide attempt and it prevents you from dealing with your issues in constructive ways.

It is, like most unhealthy coping mechanisms, a temporary fix that often leads to the person adopting other destructive behaviours.

Ruminating – or obsessive overthinking – is an unhealthy coping mechanism used commonly by depression and anxiety sufferers. Because we are especially susceptible to negative thoughts, we tend to subconsciously fall into the habit of dwelling on them for way too long.

Ruminating often develops into an unhealthy coping mechanism because in some ways it feels comforting and protective. If we over-worry, we’re prepared for the worst and won’t be surprised when it happens. Our negative thoughts can also be comforting, protecting us from the uncertainty of freedom and happiness.

However, ruminating is not only unproductive – it can also be dangerous. Excessive overthinking creates negative thinking patterns and thought loops that damage your mental health and considerably worsen depression.

Learning how to stop negative thoughts and adopt positive thinking patterns is one of the most significant positive coping mechanisms for depression.

It’s OK to want to be alone. Some days, the sound of other people just breathing next to me triggers fantasies about the apocalypse. However, problems arise when that one day of hiding from the world turns into a second day. And then a third day.

It’s when you’re cancelling plans and pushing people away, retreating so far into your shell that other people are unable to reach you.

“It’s losing meaningful relationships one by one. It’s losing yourself to your loneliness”

Social isolation is not only a symptom of depression, but it’s also a catalyst. It provides the perfect breeding ground for negative thoughts and the (re)introduction of other bad habits, such as poor hygiene and unhealthy eating.

Social distractions can really help quash some of those horrible thoughts, even if it’s only for a while.

Next time you feel the urge to pull away from people, remember that long periods of social isolation can have a huge negative impact on your mental health.

It might be tempting to just sleep the day away, but oversleeping to escape your negative emotions can become an unhealthy coping mechanism. As a common symptom of depression, oversleeping causes impaired cognitive functioning which makes it all the more difficult for you to fight off negative emotions.

Don’t get me wrong, I’ll be the first person to say that sex is a fucking great way of releasing those crafty little dopamines! Sex actually has loads of physical and mental health benefits, including the ability to reduce stress, depression and anxiety.

However, engaging in casual/risky sex as a way to block out negative emotions or cope with feelings of emptiness can significantly damage your mental health. Like all of these coping strategies, the benefits are temporary. It’s common to feel ashamed or regretful after the fact, which only influences your negative self-perceptions and perpetuates your unhelpful thinking patterns.

Not to mention, engaging in risky sexual behaviours also puts your personal safety at risk. As someone who suffers from impulsive borderline personality disorder, I’ve experienced the very real dangers that you can put yourself in by adopting this unhealthy coping mechanism.

So have as much sex as you like – but always remember to stay safe and self-aware.

If you find yourself using any of these unhealthy coping mechanisms and are concerned for your mental wellbeing, please seek professional advice. Talk to your doctor or go here to find out where you can access specific services.

Do you have any other unhealthy coping mechanisms that you think need exploring? Or maybe you have your own personal story you’d like to share? Whatever the case, please leave a comment below!